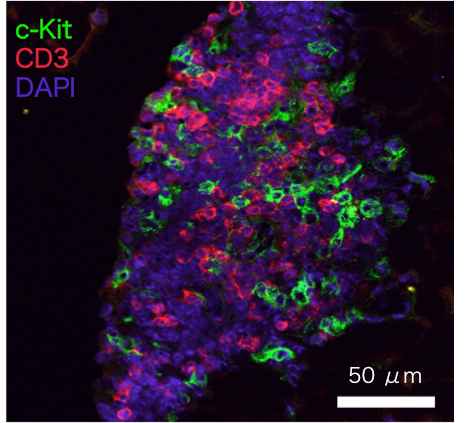 FALC is a unique lymphoid cluster that we discovered in adipose tissue, which contains a number of immune cells including ILC2. Blood vessels and lymphatic vessels are found in FALC, suggesting that cells enter and exit the tissue. FALC exists in aly/aly or RORγt deficient mice, which are known to lack all lymph nodes, implying that this lymphoid tissue is distinct from typical lymph nodes. Furthermore, mice deficient in gc, a common subunit of receptors for IL-2, -4, -7, -9, -15 and 21, lack FALC, suggesting that gc plays a critical role in FALC development. We study the mechanisms that mediate the formation of FALC in adipose tissues as well as mechanisms that control migration of immune cells into FALC.

Role of ILC2 in allergic inflammation

We have shown that ILC2 play an important role in allergic inflammation in the lung. We have also shown that ILC2 and other innate immune cells such as basophils and eosinophils interact with each other to induce allergic inflammatory responses. Furthermore, our studies demonstrated that ILC2 play a pivotal role in steroid resistance in airway inflammation, through the action of IL-2, IL-7 and TSLP, all of which are Stat5 activators. We have recently been focused on the regulation mechanisms of cytokine production from ILC2 during allergic inflammation. In addition, we want to further clarify the functional interaction of ILC2 with other immune cells.

Role of ILC2 in the homeostasis of adipose tissues

ILC2 are located in various peripheral tissues. They are known to be tissue-resident cells that do not circulate in the blood stream, at least in the steady state.  Therefore, we are investigating the specific roles of ILC2 in various tissues other than adipose, such as lung, skin, intestine, pancreas and liver. We utilize tissue-specific disease models to study the function of ILC2 during inflammation.