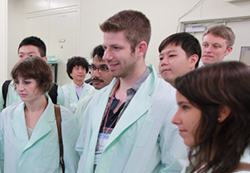 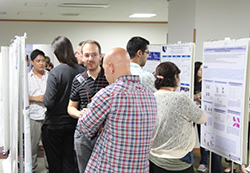 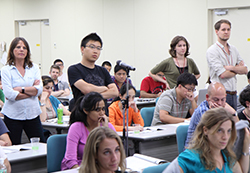 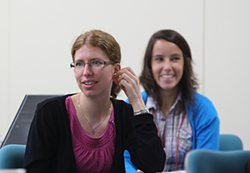 (photo5)
The 2012 RCAI International Summer Program (RISP) was held on June 22-29. This was the seventh annual RISP and was co-sponsored by the Global Center of Excellence at Chiba University. It was a special event, since RISP 2011 had to be canceled because of the Great East Japan Earthquake and tsunami on March 11, 2011 and subsequent nuclear accident at Fukushima Nuclear Power Plant. Although repercussions of this disaster are still being felt, the situation in Yokohama was stable and the RCAI leadership was pleased to resume the program, which is one of the major annual events at the Center. Forty one young scientists from nineteen countries participated in RISP 2012; approximately 80% were graduate students and the remainder postdoctoral fellows. The first part of the program (June 22-27) was held in Yokohama at RCAI. There were morning oral presentations by the students and these were supplemented by two early evening poster sessions, where there was time for more detailed discussions of the data. The afternoon sessions featured lectures by prominent scientists invited from RCAI, Japanese universities, and abroad. On June 28, the RISP students joined the annual RCAI-JSI International Symposium on Immunology at the Pacifico Yokohama Conference Center. This yearfs theme was gNew Horizon in Immune Regulation ? Bridging Innate and Acquired Immunity. Some of the RISP lecturers also spoke at this venue, but on new topics and there were also many new speakers, making for an exciting two day meeting. Most of the participants returned home after the close of the meeting, but six students remained at RCAI for a month-long research internship.

The RISP lectures at RCAI were quite diverse. Topics included lymphocyte development and differentiation, the function of microRNAs in these processes, transcriptional regulatory networks, immunoreceptor signaling, mucosal immunity, and the inflamasome. Because of their breadth, these lectures provided an expansive overview of the immune system, with experimental approaches ranging from sophisticated imaging in cancer and in the germinal center reaction, to whole animal and ghumanizedh mouse analyses. The invited speakers incorporated introductory material as well as recent highlights from their own research into their talks. The research interests of the participants were similarly varied, making for a unique opportunity for cross-fertilization among immunology subdisciplines during the oral and poster presentations and in more informal settings. The question periods following talks by the invited lecturers as well as the students were spirited and stimulating. Awards for best RISP posters were presented at a farewell party held at the close of the RCAI-JSI meeting. All of the participants expressed their appreciation to the organizers for inviting them to RISP, and some of them established collaborations as a result of the RISP that are likely to be long-lasting.

The RISP 2012 students had a full schedule, but had some opportunities to explore the Yokohama/Tokyo area and many of them also visited nearby Kamakura. RISP provided an exceptional experience from both scientific and cultural perspectives. In a survey completed after the school, the participants unanimously agreed that they would recommend the program to colleagues. Half indicated that they would consider a postdoctoral position at RIKEN and nearly all would consider returning to RCAI for a short-term period of collaborative research. The success of this unique program was due to the efforts of the Organizing Committee, chaired by Dr. Kurosaki , and the RISP Secretariat, Mss. Haraguchi, Iyama, Nomura, Yoshioka and Mr. Fukushima who kept the entire operation running smoothly, as well as to the efforts of the outstanding participants. Planning is already underway for RISP 2013. 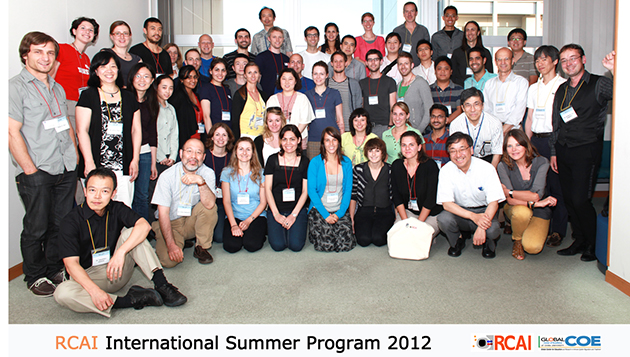