Follicular T (Tfh) cells are a recently defined subset of helper T cells that are distinguishable from other helper T cells in two important ways: by their location in the B cell follicles and by their function - to activate B cells and trigger germinal center formation. This results in clearance of viral and bacterial infections through induction of potent humoral immunity. Like Th2 cells, the Tfh cells also secrete IL-4 and stimulate antibody class switching by B cells to produce IgG1 and IgE antibodies. Differences in the regulatory mechanisms and functions between Th2 and Tfh remained unknown.

To elucidate the mechanisms of IL-4 secretion by Th2 and Tfh cells, Masato Kubo (Open Laboratory for Signal Network) and his team generated a series of mutant mice that genetically lack each cis-acting gene regulatory element in the noncoding regions of theIL-4locus. They found that mice lacking CNS2, an enhancer located ~10 kb downstream of theIL-4coding exons, had a reduced production of IgG1 and IgE. To understand the function of CNS-2, they next generated CNS2 reporter mice, in which CNS2 activated cells could be detected by GFP expression. GFP positive cells were localized in B cell follicles and their gene expression pattern was similar to Tfh cells. From these results, Kubo and the team discovered that CNS2 is the cell type-specificIL-4enhancer in Tfh cells. They also analyzed the development of CNS2-active Tfh cells, and found that these cells developed from naive helper T cells 3-5 days after immunization with antigen.

To test the impact of CNS2-deficiency on allergic diseases, they induced bronchial asthma in CNS-2 deficient mice. Asthma was observed in CNS2 deficient mice, indicating that development of asthmatic disease is mediated by Th2 and not by Tfh cells. 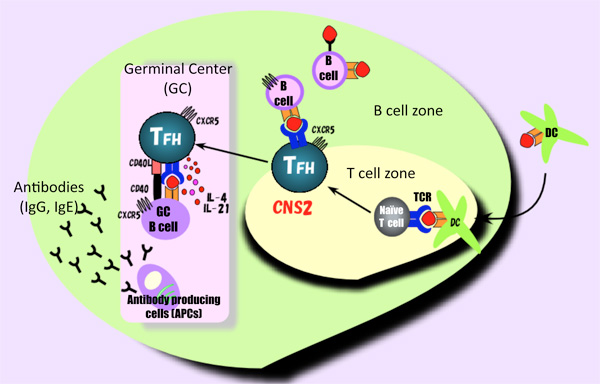