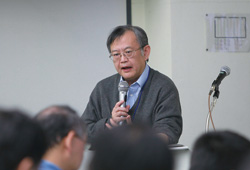 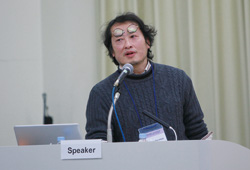 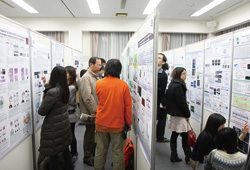 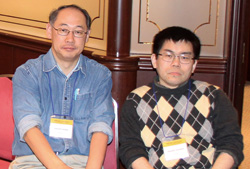 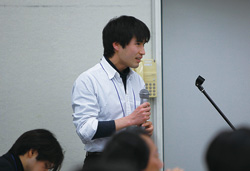 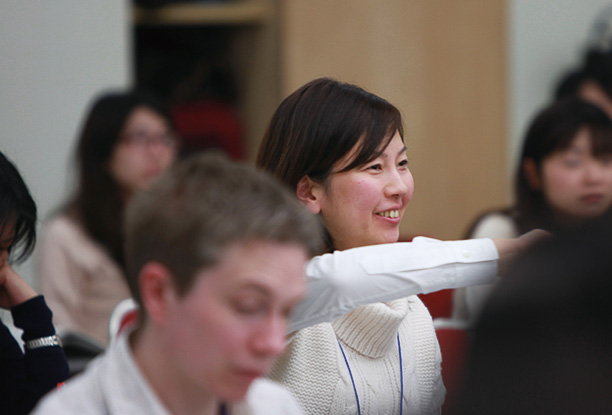 This meeting aims to stimulate synergy within RIKEN by gathering and thinking together about common biological topics in a relaxed atmosphere. In the opening remarks, Tomohiro Kurosaki (RCAI) (photo1), the cheef meeting organizer, said “The meeting will provide valuable opportunities to get to know the researchers from other fields and create synergistic collaboration.”

The theme of this year’s meeting was evolution. Although evolution has been a common theme in biology for a long time, there remain many questions. The recent spectacular advances in molecular sciences and the associated research techniques should provide keys to solve the remaining evolutionary questions, however, not many RIKEN labs really focus on them. During the sessions, participants revisited the evolutionary themes and thought together on the molecules and methods that are common in various biological fields.

The first speaker, Shigeru Kuratani (CDB) (photo2) introduced his recent discoveries on the formation of the turtle shell (carapace), which is a specialized variation in the more familiar rib growth seen in other vertebrates. Hisaya Kakinuma (BSI) then talked about the evolution of the cerebellum in vertebrates. During development, the midbrain-hindbrain boundary (MHB) region acts as a signaling center for cerebellar development. Specific gene enhancers conserved in jawed vertebrates promote this development, but are absent in the jawless lampreys, which have a very small cerebellum. The third speaker, Shigeharu Moriya (ASI), discussed strategies to understand the evolution of the complex ecosystem. Although phylogenetic analysis has been used as the conventional approach to track the evolutionary trail, a large part of the biosphere is easily rearranged by lateral gene transfer, generation of organelles and /or symbiosis. He introduced a range of omics approaches to analyze the symbiotic protists of termites and then presented an integrated multi-omics analysis of marine microbial communities, which may help us to understand the effect of environmental changes. Hiroshi Ohno (RCAI) then introduced his recent meta-genomics research on gut bifidobacteria. They found that mice colonized by bifidobacterium subspecies B. longum survived when fed the pathogenic bacteria E. coli O157, and they were able to pinpoint acetate as the protective molecule. The last speaker was Akihiko Nakano (ASI). He discussed evolutionary aspects of post-Golgi and endocytic trafficking. He introduced unique plant molecules involved in membrane trafficking and indicated that land plants have evolved a unique and complex membrane trafficking mechanism.

That evening, 86 posters were presented, giving the participants the opportunity for informal discussions that should ultimately increase communication among the centers. (photo3)

On the second day, six investigators from various centers introduced the most recent research highlights. In the closing remarks, Carina Hanashima (CDB) said, “this meeting is still in the process of evolution. The next meeting is planned two years from now, and more feedback signals are appreciated.” Thanks to the participants, the organizers, Tomohiro Kurosaki (RCAI), Masato Tanaka (RCAI)(photo4 right), Satoshi Ishido (RCAI)(photo4 left), Atsushi Mochizuki (ASI)(photo5), Yoshihiro Yoshihara (BSI), Carina Hanashima (CDB)(photo6) and the secretariat office, especially Kazunari Fukushima (Yokohama RIKEN), Yasuaki Murahashi (RCAI), Aiko Iyama (RCAI) and Rie Morita (RCAI), the meeting was constructive and a great success. “It was my first time to participate in this meeting, but it was a great opportunity to get to know researchers from other Centers,” said a young postdoc from RCAI.