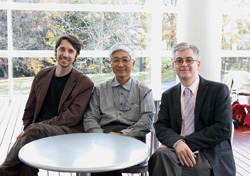 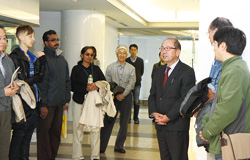 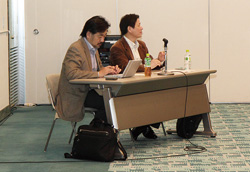 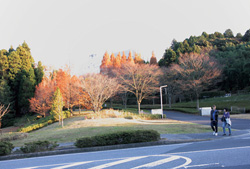 (photo4)Kazusa Academia Park
This year’s RCAI Retreat was held on Nov. 29-30 at Kazusa Academia Park in Chiba prefecture. The aim of the RCAI Retreat is to provide the RCAI scientists with the opportunity for open communication and in depth discussion of ongoing research projects by gathering the members at a quiet place with few distractions. One hundred and fifty one RCAI members and two editors, John F. Foley of Science Signaling and Zoltan Fehervari of Nature Immunology, participated in the Retreat. (photo 1 right and left, respectively)

Two poster sessions were held on the first day. One-hundred four posters were presented, and nine posters were selected for awards by vote of the laboratory heads. Between the sessions, eighty-seven participants took a short walk to the nearby Kazusa DNA Research Institute (KDRI), where Michio Ohishi (photo 2), Director of KDRI, greeted them at the entrance and conducted a tour. The participants were all impressed by the achievements and the state-of-the-art equipment in the institute.

The second day began with talks by the two Editors, which were followed by ten oral presentations by selected young researchers. Their stimulating presentations provoked active discussions.
The great success of this year’s retreat was due to the dedicated efforts of the organizers, Ji-Yang Wang and Hisahiro Yoshida (photo 3 right and left, respectively), and the support of their lab members (Lab. for Immune Diversity and Lab. for Immunogenetics) and the secretariats (Mizuki Shimura, Norie Takeuchi and Hiroko Iwamoto). There were several changes from the past Retreats; the organizers decided to hold the meeting in autumn, searched for the best venue on a limited budget, offered a tour of KDRI, and discontinued the on-site duties of the secretariats. Based on responses to the post-retreat questionnaire, more than 80% of the participants had very good impressions and many hoped to join the meeting in Kazusa again.

Wang noted that it was very difficult to select the best posters, and that a common standard for the selection and the decision making process must be reconsidered. Active participation by all researchers is also essential for the success of Retreat. Therefore, this year’s efforts for change brought great success and satisfaction, and even inspired further ideas for improvement of future Retreats.