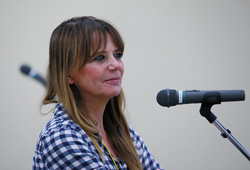 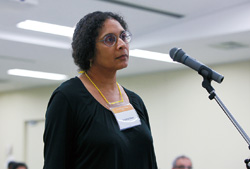 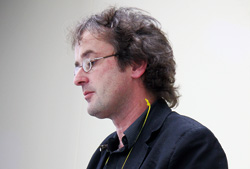 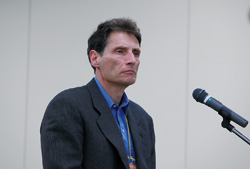 RCAI and the La Jolla Institute for Allergy and Immunology (LIAI) held a Joint Workshop "New Horizon in Immune Regulation: Towards Disease Intervention" on November 11-12, 2010 at RCAI. RCAI and LIAI established a collaborative agreement in 2004, and since then have held a series of joint workshops to facilitate research collaboration. The first meeting was held at LIAI in 2006 and the second at RCAI in 2008. In this third workshop, eleven researchers from LIAI and nine from RCAI presented their recent findings.

The first day began with the topics of developmental lineages of lymphocytes, transcriptional control and lineage plasticity. Kawamoto (RCAI) explained that reduction of IL-7 triggers upregulation of Bcl11b and enforces transition from DN2 to DN3 stage. Taniuchi (RCAI) discussed transcriptional control of CD4/CD8 lineage choice and described interesting candidates for the regulator of ThPOK silencer. Cheroutre (LIAI, photo1) explained how gut-specific stimulation reverses ThPOK activity and gives rise to CD4CD8αα T cells in the gut. Hori (RCAI) discussed the lineage stability and plasticity of Foxp3+ T cells, and Rao (LIAI, photo2) described how DNA domain-swap by FOXP3 dimers is important for suppressor activity. Kurosaki (RCAI) described his studies of memory B cells and suggested that the localization of these cells adjacent to the germinal center (GC) is important for their survival and quick reactivation during a memory response.

The second day started with topics related to allergy. Kawakami (LIAI) reported the development of an atopic dermatitis-like skin inflammation in PLCβ3KO mice. Mast cells were abundant in the skin due to Stat5-dependent IL-3 mediated proliferation of mast cells. SNP analysis revealed significant association of PLCb3, STAT5A and STAT5B genes with human atopic dermatitis.Croft (LIAI) described how LIGHT, a member of the tumor necrosis factor receptor family, controls asthmatic airway remodeling and Th2 persistence, and Nishida (RCAI) introduced ARF1 as the regulator of granule translocation during mast cell degranulation. The topic then moved to signaling and cellular dynamics. T. Okada (RCAI) and von Herrath (LIAI, photo3) described their studies using two-photon microscopy. Okada analyzed BCL6 expression in the GC and found that upregulation of BCL6 in pre-GC B cells contributed to their interactions with helper T cells and their entry into GC clusters. After the development of Tfh cells, BCL6 was gradually downmodulated and the IL-7 receptor was upregulated. von Herrath showed that the IL-21R was required for pancreatic DCs to express CCR7 after antigen uptake and then to provide the antigen, MHCII and CD86 to autoreactive effector cells in draining lymph nodes. Thus he speculated that IL-21R deficiency causes defects in CD4 T cells and antigen presentation, which prevents autoreactive CD8T cells from entering the pancreatic islets and causing type1 diabetes.

During the meeting, Mitchell Kronenberg (photo4), President of LIAI, talked about how LIAI and RCAI share a few things in common. Both names contain "Allergy and Immunology", and, as the names indicate, they share the same mission. Both institutes are about the same size, and both have an important relationship with Kimishige Ishizaka, who discovered IgE. Ishizaka is the founder of LIAI and the Special Advisor of RCAI. "It is so natural that both institutes collaborate with each other to achieve their same mission," said Kronenberg. Cheroutre and Taniuchi continue a collaboration that began in 2005, when they received RCAI's International Collaboration Award. Aside from them, most researchers from the two institutes already knew each other, and in the resulting friendly atmosphere there were many questions and enjoyable overtime discussions. The joint workshop provided a good occasion for the researchers to expand and deepen their collaborative relationships.

The period of the joint workshop coincidentally overlapped with the Asia-Pacific Economic Cooperation (APEC) meeting in Yokohama. No hotels were available in Yokohama and traffic was under strict control for security reasons. Thanks to the efforts of the organizer (Takashi Saito) and the secretariats (Hiroko Yamaguchi, Toshiko Nakamura, and Sachiko Haraguchi) this joint workshop went smoothly despite this unusual situation. 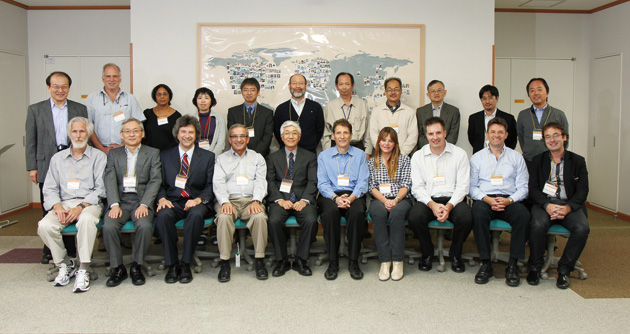