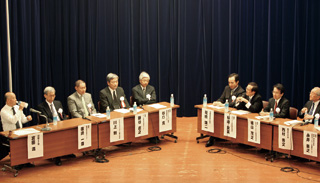 During 2010, RIKEN Yokohama Institute researchers had continued a series of brainstorming discussions about the future direction of the institute and how they can collaborate together. From these discussions, a common keyword “Life and Environment” emerged, and they started a consideration of actual collaboration schemes. To expand this discussion, they decided to use the occasion of the anniversary event to reconsider the relationship between science and the society, and the functions of RIKEN.

According to the new policy drafted by the Council for Science and Technology Policy, the government will shift their emphasis from "Science and Technology" to "Science, Technology and Innovation." Social contributions resulting from scientific research are now more expected by the society. The participants discussed the crucial importance of basic science for true innovation, and how a bridging framework can be built between basic science and solution science.

The Science and Society discussion provided the people an opportunity to think about the future direction of science in Japan. “Foundations for creative research is the key, I thought. Japan will be respected by other countries in that context, and it will be our pride,” a participant said. “Preventive medicine will be important for the future Japan. I am impressed that therapeutic medicine is only one aspect of medical sciences,” another remarked.