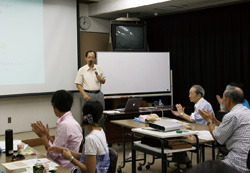 RCAI held a Science Café on Saturday, Sep. 4 at Kanagawa Prefectural Kawasaki Library. Hiroshi Kawamoto (Leader, Laboratory for Lymphocyte Development) introduced a story “Making iPS cells from lymphocytes.” Fifty-five participants, from high school students to retired folks, learned about iPS cells that Kawamoto and colleagues generated from NKT cells and their possible use for cancer therapies. Kawamoto’s original illustrations, a video of his amateur rock band “Negative Selection,” and lots of humorous stories helped the participants understand the topic easily and feel more familiar with researchers. A high school girl said that she was worrying about what she should major in at the university, and Kawamoto told her that she doesn’t have to be worried too much because immunology is related to various scientific fields, and he invited her to visit his laboratory.