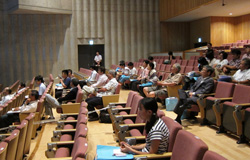 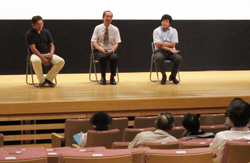 RIKEN RCAI, OSC (Omics Science Center) and GSC (Genome Science Center) jointly held a public seminar at Yokoyama Science Frontier High school, a public school nearby the RIKEN Yokohama Institute. This seminar was one of a series of events planned to celebrate the 10th anniversary of the RIKEN Yokohama Institute. Such a joint out-reach activity by the RIKEN Centers was the first of its kind apart from the annual open campus. The first talk by Yoichi Gondo (GSC) was entitled "Mouse tells the genome: What are the genome, DNA and genes?" He explained the importance of genome research in an easily understood manner. The second talk was "The day we were defeated by dinosaurs" by Harukazu Suzuki (OSC). He described how his gene transcription-network project was published in Cell, but the news did not appear in newspapers or on TV, because, unfortunately on the same day, a discovery concerning the extinction of dinosaurs was published in Science. He discussed how out-reach activity is becoming important in order to facilitate the people's understanding of scientific research.

The third talk was "Allergy and Immunology" by Yasuyuki Ishii (RCAI). He explained the current status of allergy therapeutics and his allergy vaccine project. After the presentations, emcee (Haruka Iwano, RCAI) led the panel discussion by the three speakers, who answered questions from the floor. "I could ask my long-time questions. I hope this kind of event will be repeated," one participant commented.