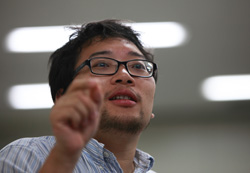 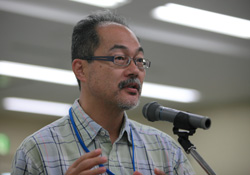 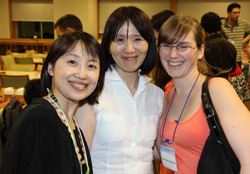 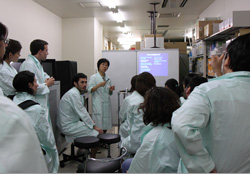 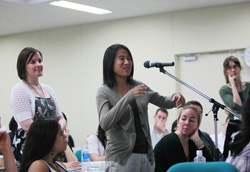 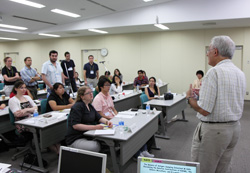 (photo6)
The RCAI International Summer Program (RISP) was held on August 17-27, 2010. This was the fifth annual RISP and was co-sponsored by the Global Center of Excellence at Chiba University. There were 141 applicants to the program and forty-four graduate students and postdoctoral fellows from ten countries were accepted to participate in RISP 2010. The first part of the program was held in Yokohama at RCAI. There were morning oral presentations by the students, and their posters were available for viewing and discussion throughout the week. The afternoon sessions featured lectures by invited experts from RCAI, Japanese universities, and abroad. There was also a presentation by Kevin Da Silva, an editor for Nature Medicine, who described the journal’s submission and review process. This year’s RISP was unique – for the second part of the program the participants traveled to Kobe where they attended the 14th International Congress of Immunology. A prerequisite for their acceptance into RISP was that they present their research in poster or oral format at this meeting. After the Kobe meeting, three of the RISP participants returned to Yokohama for a month-long laboratory internship at RCAI in the laboratories of Takashi Saito, Hiroshi Ohno and Masato Tanaka.

The RISP lectures at RCAI were very diverse. Topics included lymphocyte development differentiation and physiology, as well as the function of microRNAs in these processes (Qi-jing Li, photo1), dendritic cells, epigenetic regulation of gene expression, signaling, tolerance, mucosal immunity, and the innate immune system. Because of their breadth, these lectures provided an expansive overview of the immune system, with approaches ranging from single molecule to whole animal and “humanized” mouse analyses. The invited speakers incorporated introductory material as well as recent highlights from their own research into their talks. The research interests of the participants were similarly varied, making for a unique opportunity for cross-fertilization among immunology subdisciplines during the oral and poster presentations as well as in more informal settings. The question periods following talks by the invited lecturers and participants were spirited and stimulating. Awards for best RISP posters were presented at a reception held at RCAI the evening before the students departed for Kobe on August 21st. All of the participants expressed their appreciation to the organizers for inviting them to RISP, and many of them established collaborations as a result of the RISP that are likely to be long lasting.

The RISP 2010 students had the opportunity to explore both the Yokohama/Tokyo and Kobe areas. With a small meeting atmosphere at the RCAI venue and a large international meeting flavor at Kobe, this provided an exceptional experience from both scientific and cultural perspectives. In a survey completed after the RISP, the participants unanimously agreed that they would recommend the program to colleagues. Half indicated that they would consider a postdoctoral position at RIKEN and nearly all would consider returning to RCAI for a short period of collaborative research. The success of this unique program was due to the efforts of the Organizing Committee, chaired by Hiroshi Ohno (photo 2) and Tomohiro Kurosaki, and the RISP Secretariat, Mari Kurosaki, Yuko Ochi (photo 3 left), and Sachiko Dohi (photo 3 center), who kept the entire operation running smoothly, as well as to the efforts of the outstanding participants. 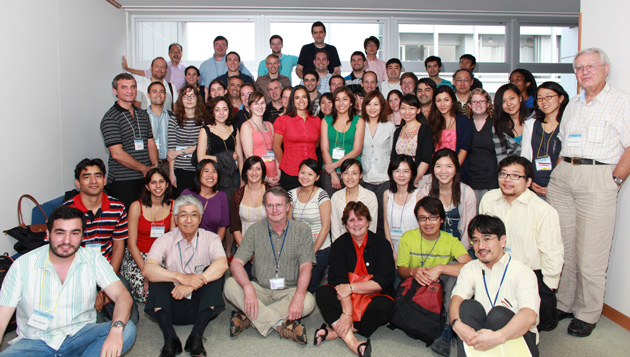