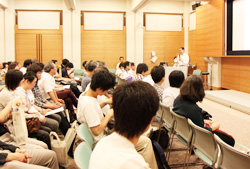 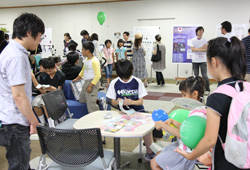 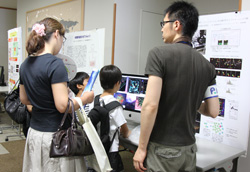 RIKEN Yokohama Institute Open Campus was held on July 3, 2010.There were 2,629 visitors, including 1,757 adults and 872 children. Fumihiko Ishikawa, Leader of the Research Unit for Human Disease Model, gave a seminar “Humanized Mouse: Challenges for the New Medical Care and the Drug Development.” He first introduced what humanized mice are, and then described how these mice can contribute to new medical care for incurable diseases. The audience spanned many generations, students from high schools and universities, young couples, families and retired folks, and they were surprised to learn that such new technology is becoming a reality. The seminar can be viewed on the RIKEN Channel of YouTube (in Japanese only)

Twenty RCAI teams exhibited posters and the researchers explained their projects to the visitors. Hiroshi Kawamoto and the members of the Laboratory for Lymphocyte Development gave hands-on practice to isolate lymphocytes using the fluorescence activated cell sorter. After learning the basics of lymphocyte development and the principles of the cell sorter, the twenty participants were divided into groups and isolated CD4+CD8+T cells from mice.“I took this course before, but came back again. To me, this is one of the highlights of this Open Campus,” one participant explained.