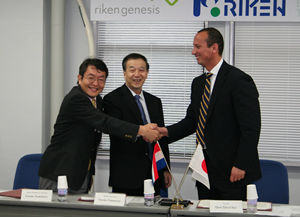 As the first international project of its kind, this collaborative research brings together institutes leading the world in research on advanced areas of forensic medicine such as DNA testing with the aim of developing and implementing new SNP-based forensic science technologies, in order to establish the next-generation of high-speed and high-precision DNA testing. The project unites the Netherlands Forensic Institute, Europe's front-runner in forensic science, the RIKEN Center for Genomic Medicine, a world leader in genomic medicine with its large-scale high-throughput SNP analysis technology, and RIKEN GENESIS, a company implementing a small and rapid SNP analysis system.

Background
Through the establishment of large-scale high-throughput SNP genotyping technology (Invader assay) for comprehensive genomic analysis, the RIKEN Center for Genomic Medicine has advanced research on genes associated with disease and drug response, and become a leading center in the world of genetics as well as a national center for genomic medical research.

By using the original SNP genotyping technology, the center has also made the greatest contribution in the international HapMap Project, which aims to organize basic information on genetic research. Furthermore, in specialized fields related to forensic medicine, the center has developed a new genotyping technique using SNP analysis technology in cooperation with Japan's National Research Institute of Police Science, and is also collaborating with RIKEN GENESIS to develop a small and rapid SNP analysis system. 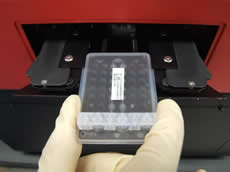 The starting point for the current agreement on this collaborative research dates back to October, 2008, when the RIKEN Center for Genomic Medicine accepted a visit proposal from the Netherlands Forensic Institute, via the Japanese National Research Institute of Police Science. In November of the same year, Dr. Tjark Tjin-a-Tsoi, CEO of the Netherlands Forensic Institute, and Marcel van der Steen, adviser to the NFI’s board of directors, came to Japan and visited the Center for Genomic Medicine, as well as participated in an exchange of views with researchers.

Research collaboration
Short Tandem Repeat (STR) method is a widely-used method for DNA testing which distinguishes individuals by using DNA markers that contain multiple repetitive sequences, taking advantage of the fact that the number of times such sequences repeat themselves differs from person to person. In cases where only a minute amount of DNA can be extracted from a sample, however, or where sample DNA has undergone degradation, as in the case of bone, STR-based DNA testing is difficult.

In the current collaborative research, the RIKEN Center for Genomic Medicine and the Netherlands Forensic Institute bring together their respective technologies to develop a new SNP-based high-speed and high-precision DNA testing technology specialized for the forensic science research. The use of SNP as a genetic marker will enable researchers to accurately determine genotypes even in the situations which posed problems for STR-based DNA testing, such as when samples are minimal or when sample DNA has been poorly preserved, thus promising to become a powerful new technique for forensic science. Furthermore, with the cooperation of RIKEN GENESIS, the collaboration also seeks to put the next-generation SNP-based DNA testing methods in the practical use of forensic science.

Outline of each organization
(1) RIKEN Center for Genomic Medicine
Founded in 2000 as a part of Japan's Millennium Genome Project, the RIKEN Center for Genomic Medicine was known as the RIKEN SNP Research Center until it adopted its current name in 2008. The main aim of this center is to construct infrastructure for the realization of personalized medicine through the establishment of large-scale, high-throughput SNP genotyping technologies. Using these techniques, researchers systematically analyze SNPs in the human genome and search for disease-related genes, genes related to drug response and examining the effect of SNPs on gene function.

(2) The Netherlands Forensic Institute (NFI)
The Netherlands Forensic Institute was established in 1999 through the merger of the Forensic Laboratory, founded just after the Second World War in 1945, and the Forensic Medical Laboratory, founded in 1951. With a staff of more than 450 employees, the NFI, which transferred its operations to the Hague in 2004, is one of the largest and highest-standing forensic science research institutes in the world. As an autonomous division of the Dutch Ministry of Justice, the NFI performs testing not only for police and prosecutors, but also for courts and corporations, as well as defendants. The NFI has also built a strong track record abroad in providing expert opinion for large-scale disasters and in cases of war crimes.

(3) RIKEN GENESIS
RIKEN GENESIS was founded on October 15, 2007 through a joint investment by RIKEN Venture Capital Co., Ltd. (Akito Arima, President) and Toppan Printing Co., Ltd. (Naoki Adachi, President) on the basis of SNP genotyping technology developed at the RIKEN Center for Genomic Medicine. Through a technology partnership with RIKEN, RIKEN GENESIS strives to increase individuals' quality of life through implementation of commissioned analysis work based on SNP typing, and work in SNP analysis systems and peripheral services, toward the goal of realizing personalized medicine.

- Supplementary explanation -
（*1） Genotype analysis system: It has been discovered that due to differences in specific parts of DNA, there are differences between individuals in terms of susceptibility to side-effects of medication and to certain diseases. Systems that analyze and identify these differences in specific parts of DNA are called genotype analysis systems and are receiving attention as they are able to predict the occurrence of side-effects or disease through prior testing.