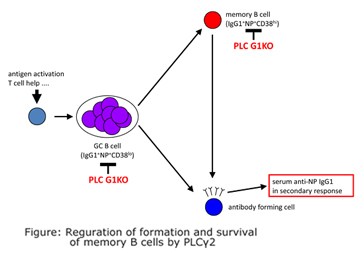 Immunological memory is the hallmark of the adaptive immune response. Memory exists in both T and B cell compartments, but B cell memory is the focus of the studies by Hikida and colleagues. Humoral, antibody-mediated memory has several distinguishing characteristics. Immune responses on secondary antigen encounter are more rapid than the primary response, the antibodies, mostly IgG, have higher titers and higher affinity due to somatic hypermutation.

Most memory B cells are thought to originate in the germinal center (GC), where somatic hypermutation and selection based on the affinity of the BCR for the antigen are responsible for the generation of high-affinity antibody variants. These ultimately differentiate into long-lived plasma cells or long-lived memory B cells. The GC is also the site of antibody class switching, so that the memory B cells express an IgG BCR. Memory B cells generated are thought to acquire intrinsically different traits from their naïve predecessors, including longevity, that account for more rapid and heightened secondary antibody responses.

The molecular basis for the development and survival of memory B cells is poorly understood. It was known from previous studies that the cytoplasmic tail of IgG1 is required for normal secondary antibody responses, however the mechanism was unknown. The studies reported here identified a requirement for phospholipase C (PLC)γ2, an enzyme known to be important in BCR signaling, in the formation of GC and memory B cells. Genetic ablation of PLC-γ2 by conventional knockout strategies results in a premature block in B cell development, making these mice unsuitable for studying memory B cells. The authors used a clever strategy of crossing floxed PLC-γ2 mice with Cγ1-Cre knockin mice. In this inducible system, the Cre recombinase is expressed and the PLC-γ2 gene is deleted only when the endogenous Cγ1 locus becomes transcriptionally active, i.e. just prior to isotype switching. Using this system the authors found that primary immune responses were normal, however there was an almost complete abrogation of the secondary antibody response. These and other observations demonstrated that PLC-γ2 is required for the efficient generation of GC and memory B cells as well as for their survival (Figure).

These studies provide the first clear cut definition of a signaling defect that differentially affects naïve versus memory B cells and have potential clinical importance. An understanding of what regulates memory B cell generation and survival is important in the vaccine field, where the goal is to generate effective memory responses to pathogens, as well as in autoimmunity, where elimination of autoreactive memory cells might alleviate disease.