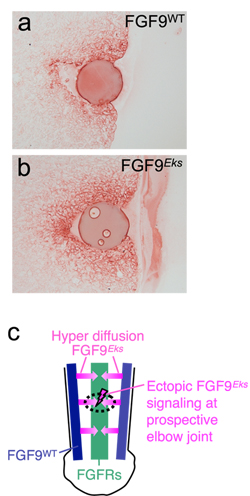 (a, b) Increased diffusibility of FGF9Eks in the forelimb bud.
FGF9WT or FGF9Eks beads were implanted into forelimb buds of Fgf9-/- embryos of E10.5 mice. Diffusion of exogenous FGF9WT (a) and FGF9Eks (b) after 2 hours was immunodetected using a FGF9 antibody.

In this study, Koseki's team identified a missense genetic mutation in FGF9 of Elbow knee synostosis (Eks) mutant mice, which have an abnormal gait and joint bone adhesions in the elbows and knees. The mutated residue was predicted to participate in homodimerization and receptor activation. Indeed, biochemical and biophysical analysis showed that the mutant protein (FGF9Eks) existed primarily as a monomer, while normal FGF9 (FGF9WT) was present primarily as a dimer. Furthermore, FGF9Eks mediates less potent signaling via several FGF receptors and shows decreased heparin affinity.

Heparan sulfate proteoglycans (HSPGs) are present in most tissues and regulate the distribution of FGF9 and stabilize its interaction with FGF receptors. Using molecular-dynamics simulations, the authors analyzed the configuration of heparin binding domains in monomeric and dimeric FGF9 and calculated the binding affinity with heparin, which is functionally very similar to HSPGs. They found that the dimeric FGF9 had higher affinity for heparin than the monomeric form.

The Eks mutation affected homodimerization of FGF9, and monomeric FGF9 had lower affinity for heparin. Furthermore, the joint synostosis in Eks mice is similar to that in gain-of-function FGF receptor mutants. Thus, the authors hypothesized that diffusibility of FGF9Eks would be increased because of its lower affinity for HSPG. This could lead to ectopic localization of FGF9 and ectopic activation of FGF receptors in the prospective joint, preventing joint formation. To test this hypothesis, they examined the 1) expression of FGF9 and FGF receptors, 2) ability of FGF9Eks to induce bony fusions, 3) diffusibility of FGF9Eks, and 4) ectopic FGF signaling in Eks mice. Indeed, FGF receptors were expressed in prospective joint regions, and FGF9 was expressed in myoblasts. Importantly, ectopic expression of both FGF9WT and FGF9Eks by viral transduction caused knee joint fusions, clearly demonstrating that both FGF9WT and FGF9Eks can inhibit joint development. The diffusibility of FGF9 was assessed by grafting FGF9WT- or FGF9Eks- soaked beads into the limb buds of FGF9 deficient embryos, and FGF9Eks was shown to diffuse farther than FGF9WT through the tissue. Finally, they confirmed ectopic FGF signaling in the prospective elbow joint in Eks mice.

Based on these studies, the authors have developed an important new paradigm in FGF biology. Previously, one might expect that an FGF mutation would affect the bioactivity of FGF by increasing or decreasing its affinity for the FGF receptor. However, the mutation characterized here instead affects the affinity for the extracellular matrix HSPGs, consequently making the FGF more diffusible and bioavailable in developing tissues, leading to developmental abnormalities. These findings could have far-reaching implications for the pharmacologic manipulation of FGF signaling under a variety of circumstances and in a wide range of tissues.

The study was featured in the "News and Views" section in the same issue of Nature Genetics. In the article, Douglas Spicer commented that the findings are an important step toward a better understanding of FGF biology and may lead to new therapeutic strategies to manipulate this pathway (Nat. Genet., 2009).