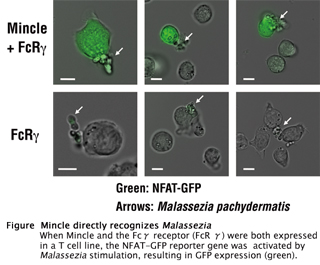 ITAM-coupled receptors are often called "multi-task" receptors because they have the ability to discriminate the quality of the ligands. Some ITAM-coupled receptors, such as the antigen receptors on T cells and B cells, can recognize differences in antigens to determine the appropriate cellular responses. Some C-type lectins have also been reported to recognize various self and non-self ligands. To explore the possibility that Mincle is a multi-task receptor, Saito's team searched for the exogenous Mincle ligand.

Because Mincle is structurally similar to other C-type lectins that recognize non-self ligands such as fungi, they first screened pathogenic fungi for Mincle-ligand activity. Of the more than 50 species tested, only Malassezia species induced activation of a reporter gene (figure). The authors then obtained Mincle deficient mice and found that cytokine/chemokine production by macrophages in response to Malasezzia was impaired, as was the in vivo inflammatory response to the fungus. These results indicated that Mincle is a specific receptor for Malassezia species and plays a crucial role in immune responses to this fungus. They further investigated the structure of Malassezia recognized by Mincle. Since mutation of the mannose-binding motif in the carbohydrate recognition domain of Mincle inhibited responses to Malassezia, mannose binding seemed to be crucial for Mincle to sense this organism.

Malassezia species are ubiquitous residents of human skin, but under some conditions they induce invasive infections, such as tinea versicolor, atopic dermatitis, and lethal sepsis. The identification of Mincle as a specific receptor for Malassezia will provide valuable information for the development of therapy and effective drugs for Malassezia-related diseases.