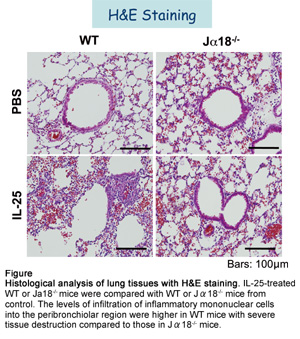 An RCAI research team led by Masaru Taniguchi and Hiroshi Watarai discovered a novel subset of NKT cells that contributes to the airway hypersensitive reaction (AHR). AHR is an animal model for asthma, which is caused or enhanced by environmental factors such as allergen exposure. AHR was known to be associated with cytokines produced by Type 2 helper T (Th2) cells, but the precise mechanisms that drive AHR were unclear. Recently, Interleukin-25 (IL-25), also known as IL-17E, was reported to be produced by activated Th2 cells and mast cells, resulting in enhanced AHR. NKT cells are also involved in the development of asthma. NKT cell-deficient mice fail to develop antigen-induced AHR. Moreover, activation of NKT cells can induce AHR in the absence of Th2 cells, suggesting that NKT cells are directly involved in the AHR pathogenesis.

Given these intriguing observations, the authors used a genetic approach to directly investigate the contribution of IL-17RB+ NKT cells to IL-25-triggerd AHR. Normal mice treated with IL-25 and immunized developed AHR; they had increased lung resistance, infiltration of inflammatory cells, abundant mucus-producing cells, and inflammatory cytokine production. Similarly treated NKT-deficient mice, by contrast, had no evidence of AHR. Furthermore, depletion of IL-17RB+ NKT cells by IL-17RB antibodies suppressed the development of AHR. These findings strongly suggest that IL-25 directly acts on NKT cells to induce AHR.

Allergy has become an increasing health and economic burden in industrial countries. In Japan, an estimated 30% of the population suffers from allergies such as pollinosis, asthma, or atopic diseases. According to the World Health Organization, 300 million people worldwide are afflicted with asthma, and there are 3 million patients in Japan. It has also been reported that IL-25 producing cells are present in patients with asthma. In this study, IL-17RB neutralizing antibodies prevented AHR and reduced inflammation, suggesting that IL-17RB will be a promising therapeutic target for asthma intervention.