The FANTOM project started in the year 2000 with a meeting, where it was decided to embark on an ambitious mission to annotate the function of mammalian genes by the analysis of full-length cDNA collections. FANTOM has evolved over the years through deciphering genomic regulatory elements and networks that control the function of the genome. During the past 19 years, we (1) constructed comprehensive catalogues of annotated protein coding genes, (2) found that the majority of the output of the genome consists of lncRNAs, (3) comprehensively annotated promoters and enhancers and provided the most comprehensive map of them (4) inferred the regulation of regulatory elements, such as promoters, enhancers and lncRNAs. These achievements were made possible by international collaborative efforts, and the current project, FANTOM6, includes more than 250 researchers from over 60 research organizations.
The lncRNA collection produced by FANTOM5 has accurate 5’-end data, which allowed us to reliably recount the number of lncRNAs in mammalian cells. We estimated that at least 29,000 lncRNAs exist and inferred 19,175 potentially functional human lncRNAs, either by examining conservation of promoter/exons, overlap with GWAS or implication in eQTL databases (Hon et al, Nature 2017). Currently, more than 96% of lncRNAs have no reference in PubMed (De Hoon et al. Mamm. Genome 2015), discouraging further investigation into their biology. To overcome this limitation, FANTOM6 proposes to broadly screen for the function of lncRNAs. We believe that a substantial fraction of the identified lncRNAs will be revealed to have some sort of function. 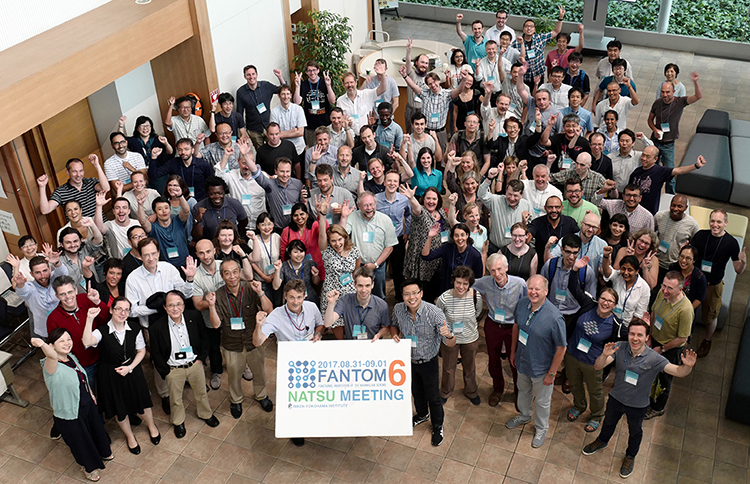