We regard the cancer immunology as an interdisciplinary branch of immunology, since cancer represents a failure of homeostasis of the immune system, involving many components. The first goal of the cancer immunology is to understand the role of immune system immunoediting in the development and progression of cancer. An understanding of this process will lead to the stratification of cancer diseases by identification of the target molecules or antigens for immune recognition of cancer. Several groups initiated the cancer immunology theme. Ishikawa’s group and Fujii’s group recently demonstrated the important function of T cell subsets and NKT/NK cells, respectively, in the regulation of progression of some cancers. The second goal of the cancer immunology group is to develop a cancer immunotherapy strategy to treat cancer by enhancing the host protective response. We have several translational research projects aiming at application of NKT cell therapy, including iPS-NKT and aAVC therapy. Among them, Koseki’s group has almost completed an iPS-NKT cell preclinical trial. Fujii’s group has launched a Phase I clinical trial of aAVC-WT1 therapy in acute myeloid leukemia. These projects have been supported partly by the Japan Agency for Medical Research and Development (AMED) as well as the RIKEN Drug Discovery and Medical Technology Platforms (DMP). In addition, as a clinical study, Fujii’s group has have been collaborating with 15 National Hospital Organization (NHO) hospitals using autologous iNKT cell ligand-loaded DC therapy in a randomized phase IIa trial in early stage lung cancer patients. In this study, they have been performing immunological analyses of the patients. 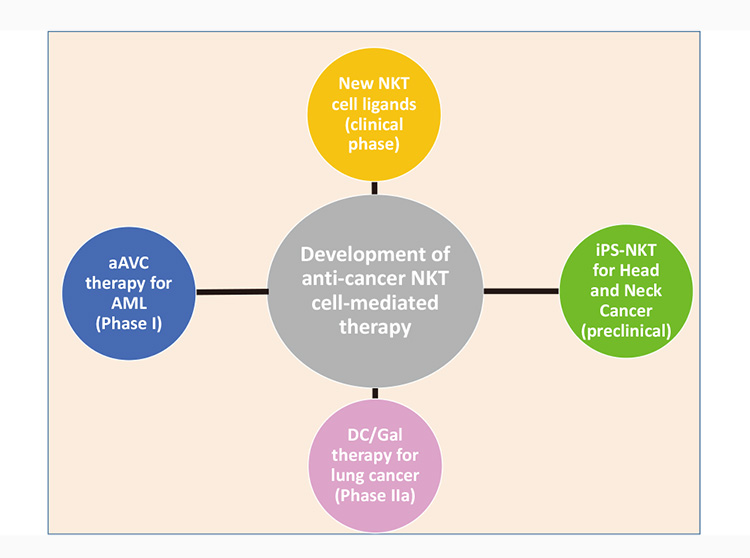